Music has always been incredibly important in my life. My childhood was filled with my parents singing in the car, watching my uncle and grandfather play in a band, and loving to listen to any and all kinds of music. I was in band the minute I was able to join in elementary school, and jumped from instrument to instrument trying to find something that was the best fit for me. I found my best fit when I was in grade ten and picked up an oboe, immediately falling in love with not only its sound, but with the challenge that it presented me.

I suppose it is not entirely surprising that I found myself pursuing a music degree. 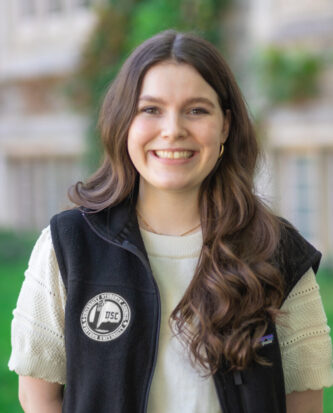 In grade twelve, I was enrolled in a co-operative education course, where I was able to mimic being a “professional” musician, under the supervision of my high school music teacher. This was one of the most memorable courses of my high school experience, as I was able to spend most of my day practicing, studying scores, and preparing repertoire for my university auditions. At this point the expectation I had set for myself was that I would go on to study music performance, and eventually become a studio artist who would record for movie soundtracks.

I auditioned for a few schools, but the one that I hoped and prayed I would get into was Western. The oboist who was my mentor decided to go to Western to study music, and in my trial lesson I was inspired by one of Western’s professors, Shelley Heron. When I received my offer of admission, I was elated, and immediately accepted.

The first few months of my first year were overwhelmingly exciting. I had an amazing roommate – also a music major, shout out to you Shayanne – and I was in love with the process of getting through my first year. For the first time in a long time, I was the happiest I could have imagined being.

Call it cliché, but it came to a grinding halt rather quickly.

In January of 2019, I began to feel pain in my wrist. I ignored it initially, thinking it was a result of not playing as rigorously over the winter break, and my muscles were just adjusting back to my normal routine. I would take Advil in the mornings and use Voltaren before practicing, and for the most part, I was able to ignore the pain. I made the mistake of pushing through until I was in excruciating pain without medication, and unable to hold my instrument without my thumb and fingers spasming. I went to a sports medicine clinic and their team told me I had to stop playing for four months.

Frankly, it felt like my life was over. I had played oboe everyday for almost 3 years, and now I had to quit cold turkey for the entire second half of my first year. I would miss performance auditions and my final playing jury, and be set back significantly compared to my peers.

This was only the beginning of the next three years of my journey through my degree, on and off painkillers,weekly physical therapy, as well as conversations with my private teacher about whether or not I would have to switch instruments. The latter were the conversations that hurt the most. This also meant I was now unlikely to be able to pursue a degree in performance, which at the time felt like my whole reason for even going to university and working toward a degree.

I deferred to Music Education, at the time just wanting any degree that I was able to complete, and I had the prerequisites to switch from a general music degree to education without complication. I had missed a few of the courses in second year that would have had me working with other students in the education stream, so I felt like a fish out of water among many of my peers. I had to force myself to enjoy the first semester of my third year, still feeling behind and disappointed in the choices I felt forced to make.

But isn’t it funny how life works out sometimes? Here’s what happens next:

Turns out, I do have a passion for education. It came about in unprecedented ways, as I found my footing getting involved in student government, and developed an interest in how academics affect students. I became involved with the University Students’ Council, and decided to run for Vice President University Affairs in my fourth year.

Now, I am able to come into work everyday and do what I am truly passionate about: advocacy.

It may feel like a failure at the time, but when faced with those situations that knock you down, look to what you are passionate about, and you will find your way again. If you follow what you care about, you will always find fulfillment. The rest is just the fine print.